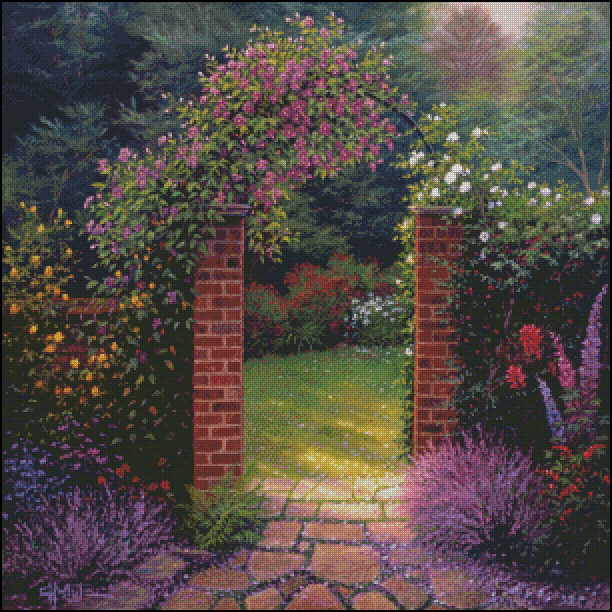 It All Began with Knitting

My introduction into cross stitch began in a round-about way when I was quite young. When I was about 8 years old, my aunt taught me how to knit. I had always seen characters in cartoons simply clacking two needles together and seeing the progress grow down to the floor in record time, but I soon found out that it was simply not true and that there is a lot more involved in just “clacking one’s needles together.” I was proud of myself for learning this hobby and by age 9, I had completed my first winter scarf and presented it to my grandmother on her birthday who was thrilled to get it. Even though it was baby blue and yellow and had a large hole in the center of it where I had dropped a few stitches, she was not in the least disappointed, and if she was, she didn’t show it. Her face shown with nothing but happiness at getting a homemade gift from me, her granddaughter.

At age 10, I witnessed our babysitter’s sister crocheting with pink yarn. My eyes watched her every move and she held my attention as I saw her hand holding a single needle flitting across the lacy-looking stitched piece. I was mesmerized by this and was ever more determined to learn to crochet. I asked my mother to buy me some instructional books on how to crochet, and I sat in my room on my bed and studied those diagrams daily. In fact, I practiced until I felt I had taught myself well enough to tackle making an afghan. My first afghan was dark sage green, gold and cream (boring colors for a kid to work with, but I put up with it). I started out with the cream color making a large granny square and began working with the gold and then green. When I got far enough, I noted a large pouch that had developed in the center of my afghan, but by the time I had figured out that I had made some serious mistakes by dropping or rounding off a couple of stitches, it was too late and I was too far gone to rip it out so I kept going. I presented the piece to my father who surprisingly had nothing but encouraging words to say to me while I was working on this particular project, but I did not let the pouchy afghan deter me from continuing on with crocheting. I then took on the art of crochet with a vengeance and started making even more challenging pieces including sweaters, blankets, and even hats without mistakes.

On the Right Path with Rug Hooking

At age 11, I was looking at a Shillcraft https://www.shillcraft.com/ catalog that had the most beautiful spectacular rugs kits in it. I went to my parents and told them I wanted a rug kit for Christmas. They obliged and bought the kit for me. It was huge and it took me nearly three years to complete, but when it was finished, it was a show-stopper. My parents also purchased a rug kit for my sister at that time (who was four years younger than me, and really had no interest in rug hooking at all), but it was bought out of convenience. Her rug was smaller than mine and had a white background. It took her nearly 5 to 6 years to complete it and when it was finished, the entire rug was black from dirt and had to be cleaned before use.

Then one day years later when I had become an adult, I was in Michaels and was looking for a needlepoint kit to take with me on a trip. I picked one out that was colorful, had plenty of flowers in it (which is what I liked), and I took to it like a duck to water and enjoyed every minute of it. The back of the project was quite messy as I had not yet learned to weave my threads in to make it look neat.

I Struck Gold When I Found Cross Stitch

One day when I was in Dublin, Ohio at a Needlework shop looking at frames https://www.sunrayscreations.com/cross-stitch-frames-stands, an employee asked me what I was used to working on. I told her needlepoint. She then said the magic words, “Well, we will have to get you interested in doing counted cross stitch, because once you learn it, you won’t want to put it down.” And yes, she was right! From that moment on, I began my love affair with cross stitch and have not put it down since. I enjoy stitching landscapes, particularly those spectacular patterns in the Charles White series https://www.sunrayscreations.com/charles-white-cross-stitch/. It is something I never grow tired of, and when I need a short break from it, I revert to crochet which is a good diversion to cross stitch. Although, recently have also used diamond painting as an interesting diversion which is also addictive when I have the time.

In a way, I think part of my love for cross stitch is hereditary, and there’s no doubt in my mind God had a hand in aligning these traits and encounters. Apparently, I come from a long line of stitchers and textile crafters. My great-grandmother did quilting and used to hold quilting bees at her home. My grandmother did a lot of crocheting and once crocheted a table cloth that was so beautiful that our family doctor wanted to purchase it from her, and it has since become a family heirloom. I had an aunt who did macramé and another aunt who was quite the seamstress. My father was into rug hooking and once hooked a rug while he was laid up with a broken achilles tendon. My mother dabbled in crochet for a short while, but it was never as extensive as what it has become for me. Working with needlework is in my blood and I say it with pride and dignity.

Yes, when God calls me home, I hope like most stitchers do that there is cross stitch in heaven, and I hope I will be allowed to stitch God’s tapestries of heaven and all his wondrous glory, and use this wonderful gift of stitching he has given me. Cross stitch has become a part of me that is ingrained. It’s like learning to ride a bike. Once you learn how, you never forget it and the thrill never goes away. Let’s hear how you got started in cross stitch.